FBSW Banker Elected to Independent Bankers Assn. of Texas Board of Directors 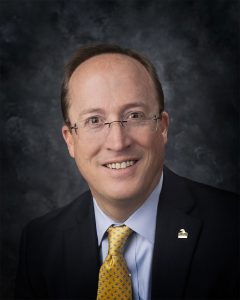 FirstBank Southwest Banker Elected to Independent Bankers Assn. of Texas Board of Directors

AMARILLO, TX—FirstBank Southwest (FBSW) is proud to announce that Will Miller, Amarillo President and Chief Lending Officer, was elected to the Independent Bankers Association of Texas (IBAT) board of directors for 2019-20. Miller was elected to this position during the association’s 45th annual convention held late September in Galveston.

With more than 30 years of community banking experience, Miller has spent the past 24 of those at FBSW. He began as a credit analyst and worked his way through commercial lending positions until he reached his current role in 2015. He began his career while in high school at a small community bank in Oklahoma and continued working at community banks throughout college. During that time, he also interned with the Office of the Comptroller of the Currency.

Miller is extremely involved in his community, currently serving as president of the Panhandle Plains Historical Society, treasurer of the Golden Spread Council of the Boy Scouts of America, treasurer of the Downtown Women’s Center and a board member for the Harrington Cancer and Health Foundation. He has volunteered with Big Brothers Big Sisters for 20 years, including serving as president, and spent many years as a Junior Achievement classroom teacher. Additionally, he previously held volunteer leadership positions with United Way, Leadership Amarillo & Canyon, Wesley Foundation and Wesley Community Center.

ABOUT THE INDEPENDENT BANKERS ASSOCIATION OF TEXAS

Formed in 1974, the Independent Bankers Association of Texas (IBAT) represents Texas community banks. The Austin-based group is the largest state community banking organization in the nation with membership comprised of more than 2,000 banks and branches in 700 Texas communities. Providing safe and responsible financial services to all Texans, IBAT member bank assets range in size from $21 million to $31 billion with combined assets statewide of $193 billion. IBAT member banks are committed to supporting and investing in their local communities.

FirstBank Southwest (FBSW) has nine banking center locations in Amarillo, Booker, Hereford, Pampa, and Perryton, Texas. It is the mission of FirstBank Southwest to be the preferred community bank in the greater Texas Panhandle by providing focused financial services for commercial customers and retail customers. For more than 100 years, FirstBank Southwest has met the needs of those working and living in The Panhandle.